Office Web Apps are the online companions to Word, Excel, PowerPoint and OneNote desktop productivity applications, which was introduced together with Office 2010, and also Office for Mac 2011. With Office Web Apps, users can create, view, edit, share, co-author and collaborate on the documents, worksheets, presentations and notes online, from virtually anywhere with Internet connection. Best of all, Office Web Apps is free, and everybody can register to use the service, regardless of whether you have actually purchase the license for Office 2010 applications.

The new cloud-based Microsoft Office Online Web Apps effectively replaces Office Live Workspace, and are available in two flavors. It’s available in Windows Live (specifically Windows Live Office), through integration with Windows Live SkyDrive or Docs.com for home users; while corporates and enterprises with volume licensing agreements can install and configure Office Web Apps on self-hosted SharePoint 2010 site, such as SharePoint Foundation 2010 which is free, or through a hosted solutions on subscription-based Microsoft Online Services.

Previously, Microsoft had invited early adopters to try out the Community Technical Preview (CTP) of Office Web Apps, although a trick allows everybody to enable Office Web Apps on Windows Live SkyDrive. 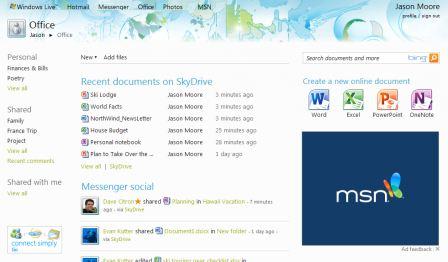 Office Web Apps offers web-based versions of Word, Excel, PowerPoint and OneNote, and provides up to 25 GB of free storage space on Windows Live SkyDrive or SharePoint, for any types of files with any extensions. In addition, Office Web Apps also feature ability to save a copy of file to local computer instead of only to Windows Live SkyDrive, real-time collaboration by multiple authors, open current document in Excel, share document via email or contact list, version history, enhanced search and has a integrated Messenger on the Web. With Office Web Apps, no additional viewer, such as PowerPoint 2010 Viewer or Visio 2010 Viewer is required, as the documents will be opened in the web browser, and there is no need to worry about compatibility between file formats or versions of Office applications.

Microsoft is committed to continuously improve the Office Web Apps. Recently, several features have been added to Office Web Apps. For example, ability to print from Word Web App editor in addition to viewer, ability to insert charts and Auto Fill in Excel Web App, and ability to select ClipArt in PowerPoint Web App. 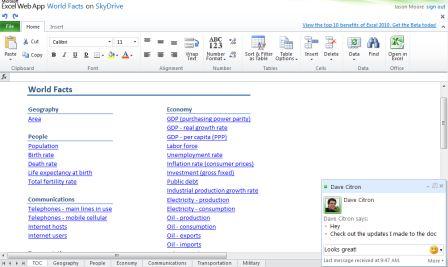 And, while Office Web Apps provides basic editing functionality, it lacks advanced features that comes with Office desktop applications. However, user can seamlessly and directly open the document currently opened in Office Web Apps in corresponding Office desktop application, without having to manually transfer the file. Once the editing is completed, saving the file in the Office program will automatically save the file back on the server without the need for manual transition. 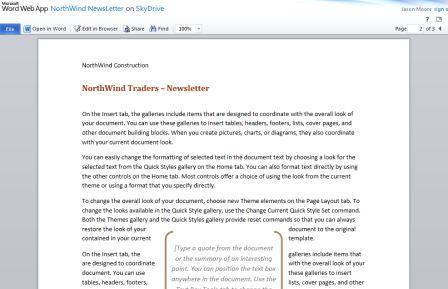 The full version of Office Web Apps have gone live for users from various countries such as US, UK, Canada, Ireland and more, though some may not be in localized languages. Office Web Apps can be accessed online via office.live.com with supported web browsers, which include Internet Explorer 7 (IE7) or better for Windows; Safari 4 or newer for Mac OS X; and Firefox 3.5 or later for Windows, Mac, or Linux.

Note that Windows Live account ID is required for all operation relating to Office Web Apps. Windows Live ID from Hotmail, Windows Live (MSN) Messenger or XBox Live can be used and shared.

How to Upload and Store Documents Onto Office Web Apps

Documents, spreadsheets, presentations and notes can be saved directly to Windows Live SkyDrive through “Backstage View” of Word 2010, Excel 2010, PowerPoint 2010 and OneNote 2010, by clicking on “Share” -> “Save to SkyDrive”. User can select an existing folder or create a new folder to save the file once logging in.

Alternatively, just use one of the following methods to access Office Web Apps enabled and integrated service, and upload the files directly using web uploader. It’s also possible to upload the files with desktop apps such as Windows Live SkyDrive Explorer.

Tip: With Microsoft Silverlight installed, user will be able to upload multiple files at once.

How to Access and Use Microsoft Office Web Apps

Office Web Apps can be access through the following services: