More and more virtualization product or solution such as VMWare Workstation and Windows Virtual PC now requires Hardware Assisted Virtualization (HAV) CPU feature in order to function properly as allows a virtual machine hypervisor to run an unmodified operating system without incurring significant emulation performance penalties. The largest chip makers, Intel and AMD implement hardware assisted virtualization in their processors as Intel VT (VT-x) and AMD-V respectively. However, not all modern CPU has hardware-assisted virtualization capability built-in though.

For user who want to verify, check, determine or get to know whether his or her PC computer supports hardware-assisted virtualization, there is a software utility named SecurAble which able to display hardware virtualization support status as Yes, No, Locked On and Locked Off. 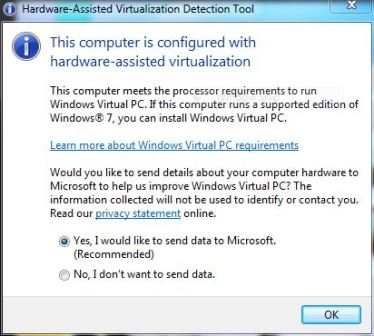 Using HAV Detection Tool is easy, just run the executable, and the results of whether hardware virtualization support is existed on the system or not (together with ability to install Windows Virtual PC) will be displayed on result dialog. It’s standalone program, thus no installation or uninstallation required.