Posted: May 5, 2009/Under: Operating Systems/By: My Digital Life Editorial Team

Hardware virtualization technology or VT is built-in natively by CPU processors. In Intel chip, the VT is called Intel VT, while AMD calls it AMD-V. The VT capability in the processor on the computer is built onto the the tiny piece of chip, and cannot be added or removed using any manual process. And even if the CPU features VT, it must be enabled in BIOS.

Most newer CPU includes VT operation by default. However, some older or even current processors available for purchase for DIY or operating on OEM computer may not support VT. When there is no VT support, Windows Virtual PC may fail to install or cannot be powered up and started virtual machine with following error message:

Instead of browsing through the long list of Intel processor’s feature list or AMD CPU’s feature to confirm the existence or non-existence of VT support, there is an easier way to quickly determine whether there is hardware virtualization system on the system. That’s by using SecurAble, a small utility that display status of CPU maximum bit length, DEP and virtualization support. 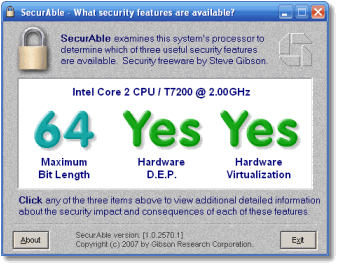 Just download and run SecurAble (no installation required). The status of hardware virtualization feature on the CPU processor is quickly display on screen. If it’s a “Yes” or “Locked On”, the Windows Virtual PC and Windows XP Mode can be used properly. If it’s a “No”, then you’re out of luck. However, there is another possibility that the result may display as “Locked Off”, which means the VT support is currently disabled by BIOS. In this case, just restart the computer and access the BIOS configuration to enable and turn on hardware virtualization support. Else you face the following error when try to launch Windows Virtual PC 7 virtual machine.

Another tool that can be used to detect hardware virtualization support on CPU is HAV Tool from Microsoft.