In Windows Vista, Windows 7 and Windows Server 2008, there are several watermarks the may appear on the corners of desktop to remind what mode or state of Windows operating system is currently running in. For example, “Evaluation Copy” for unactivated Windows, “For testing purpose only” for beta or release candidate software, “Test Mode” when test signing mode is turned on, “Safe Mode” when user presses F8 to boot into Safe Mode and “This copy of Windows is not genuine” when Windows fails WGA validation.

Not many people likes these watermark though, especially users who like to be the first to use new beta or RC builds of Windows OS, which always have “For testing purpose only” or “Evaluation Copy” watermark imprinted on a or all corner of desktop. Other than using the batch script watermark auto patcher to replace the user32.dll.mui with patched and watermark strings deleted version (Tip: Check out how to patch to remove the watermark on Windows), deepxw, the creator of reliable TCP-Z Half-Open Limit Auto Patcher, has also developed an utility aptly called, “Remove Watermark” to remove all watermark on desktop. 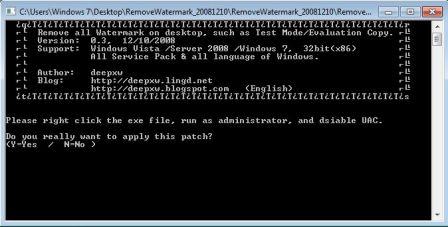 Since Remove Watermark v0.4 (previously, only user32.dll is modified), Remove Watermark supports two method of removing desktop watermark. The default method is modifying user32.dll.mui (language file) which is safe for all Windows operating system. The more advanced method is to directly modify the user32.dll file, which guarantee to 100% remove all watermark instantly and immediately. However, the second direct user32.dll patching method is not supported in Windows 7 and Windows Server 2008 R2. To use the second advanced method, run the Remove Watermark executable with “-enforce” parameter switch as argument, i.e. RemoveWatermarkX86.exe -enforce or RemoveWatermarkx64.exe -enforce.

Note that some system may experience that the desktop watermark such as “Test Mode” still exists on the desktop after reboot. In this case, run RemoveWatermark and press “R” key to rebuild MUI cache. Or open command prompt as administrator, run mcbuilder.exe again, then restart computer.

Note that the ZIP package contains two RemoveWatermark executables, namely RemoveWatermarkX86.exe (for 32-bit x86 system) and RemoveWatermarkX64.exe (for 64-bit x64 system). Run the corresponding program as administrator. There is no need to reboot to Safe Mode as the program can operate in normal mode.

And, there is another hack to remove Send Feedback link on window’s title bar.