A new exploit tool that said to be able to jailbreak all current iOS devices forever is currently been developed by various hacker groups, notably Chronic Dev Team and the iPhone Dev Team. The new jailbreak tool, SHAtter, is based on exploit on low-level bootrom, and was discovered by iPhone hacker posixninja and pod2g, in addition to GeoHot who named it as pwned4life before quitting the Apple hacking community.

SHAtter will be able to work on all Apple devices that have been released so far before the release of the hack, and on phones or gadgets with exploitable hardware that haven’t been patched by Apple upon release of SHAtter. The devices that are supported included the newly released iPod touch 4G, iPad and Apple TV 2G (2010), which also runs on iOS 4.1.

What makes SHAtter revolutionary is that Apple will not be able to patch and nuke the jailbreak exploit with a simple iOS software upgrade. Instead, in order to foil the jailbreak attempt by SHAtter, Apple will need to release an entirely revised hardware for iPhone, iPad and iPod touch. Which also means that SHAtter should work forever, regardless of firmware OS version.

However, SHAtter jailbreak is said to be tethered. Unlike untethered jailbreak such as Spirit or JailBreakMe, tethered jailbroken devices have to be connected to the computer on every reboot. 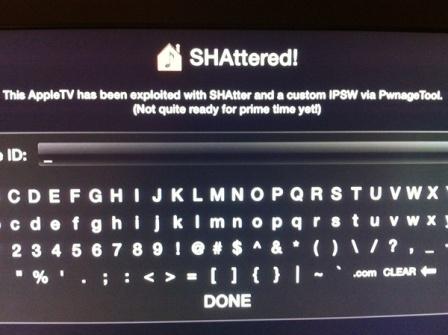 The big news of SHAtter is its ability to jailbreak Apple TV, where it can trick Apple’s new Apple TV 2G into restoring to a custom pre-jailbroken IPSW created with PwnageTool, but with ability to install apps on the device locked. Once jailbroke, the possibility to install apps on Apple TV, although hardware limitations poses a challenge. The new generation of Apple TV 2010 refresh runs on full version of iOS, instead of modified version of Mac OS X 10 on first generation of Apple TV. SHAtter has even been used to decrypt the keys for Apple TV firmware downloaded from Apple. According to iPhone Dev Team blog, the main filesystem (“Mojave8M89.K66OS”) key for 018-8609-066.dmg is:

The PwnageTool has also been used together with SHAtter as a test of a full iPod 4G jailbreak via SHAtter. However, it’s likely the PwnageTool is now required except for those with iPhone 4, where PwnageTool can allow updates while preserving the baseband for ultrasn0w to perform carrier unlock. 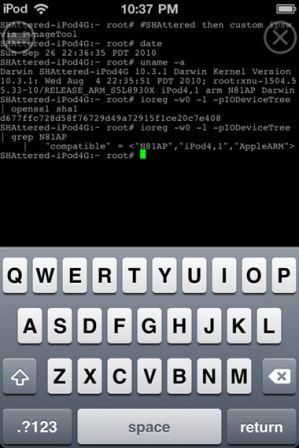 A video demo of iPod touch 4G been SHAttered.

Here’s a video demo of AppleTV been SHAttered with SHAtter jailbreak too.

SHAtter is not been released by the hackers yet, though. Development of the SHAtter for it to ready for the mainstream may likely take a while yet.