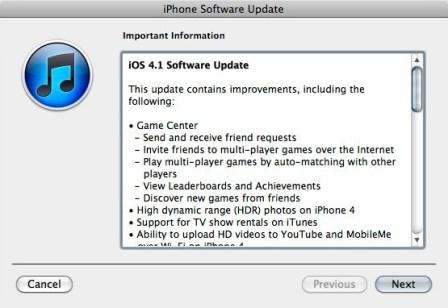 iPhone, iPad and iPod touch users can get the latest updates by simply plugging and connecting the iOS device to computer, and then download and install the latest version of iOS through iTunes.

IOS devices owners who want to perform manual upgrade or downgrade, or simply want to save a copy of the iOS software can download the iOS 4.1 with the following direct download links from official Apple server.

The first generation iPhone (iPhone 2G) has to continue to use iPhone OS (iOS) 3.1.3, while iPad will only be upgraded to iOS 4.2, where its current firmware version is iOS v3.2.2.