The official retail price of Microsoft Office 2010, the next version of popular business productivity software from Microsoft, has been revealed. Microsoft had earlier released free Office 2010 beta downloads to general public, and revealed versions (editions) of Office 2010 will be available in.

According to Microsoft Office General Manager, Rachel Bondi, the following Office 2010 line-up will be available through retail channels:

The respective suggested retail price for each edition of Office 2010 suites are: 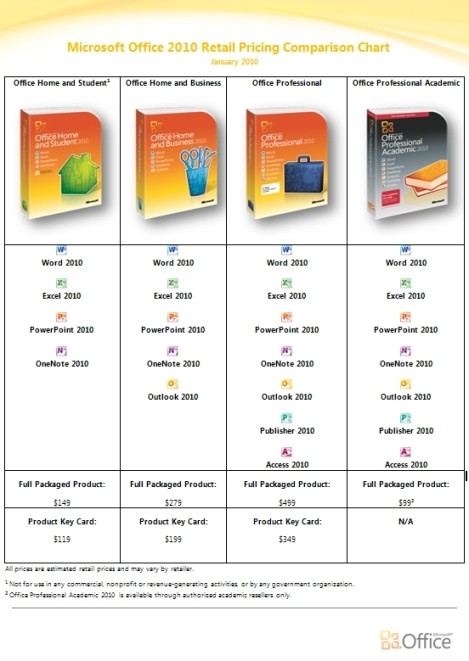 For Office 2010, Microsoft is also offering a Click-to-Run method of software delivery mechanism. Essentially, it’s a new way of delivering and updating the Office 2010 products based on core virtualization and streaming technologies of Microsoft App-V, allowing end-user to use the software almost instantly. With Click-to-Run, Office 2010 is virtualized in a virtual machine and streamed from the cloud to desktop, allowing Office 2010 to co-existed with existing and older version of Office productivity software. Click-to-Run delivery is available for both the Office Home and Student 2010, and Office Home and Business 2010 products on both 32-bit and 64-bit Operating Systems (although only the 32-bit version of Office is actually run on both platforms). Full language support is available.

Office 2010 is scheduled to be officially released on June 2010, and requires the following hardware specifications requirements.