Seagate FreeAgent Theater+ HD Media Player, as its name implied, is a media player which allows digital media to playback at TV (HDTV especially) or home theater setting instead of computer, similar to WD TV Media Player from competitor’s Western Digital. It’s possible to connect HDMI-out or VGA-out from computer to TV for playback directly (or through Windows Media Center via extender), or stream from game consoles such as Sony PS3 and Microsoft XBox 360, but a standalone media player provides a more convenient, light, and easy way to play the media without “wasting” a computer or placing a large console besides TV.

Seagate FreeAgent Theater+ HD media player is second edition, which has improved on features and functionality over its predecessor, FreeAgent Theater HD. The FreeAgent Theater+ (FAT+) now has output of HDMI, composite, component video on top of optical S/PDIF, making it a true HD media player with 1080p video output support via HDMI. For input connection, the media player features a dock, as unexpectedly only for, FreeAgent Go or BlackArmor PS 110 hard drive, plus two USB ports for any brand of external hard disk drive, USB flash drive or memory key, digital camera, or digital camcorder. The USB ports can also accept an Wi-Fi adapter (not included in package), which allows FreeAgent Theater+ HD to stream media wirelessly from a media server or access content on a networked location and Internet. Without the Wi-Fi adapter, there is a Ethernet port for cable-wired connection to router or gateway for same purpose. 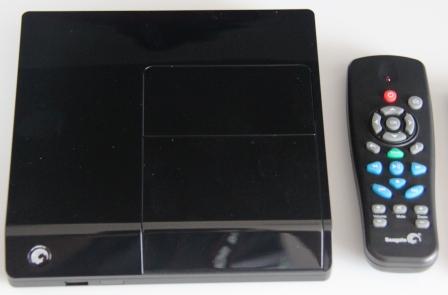 There is no control buttons on the device itself, so all operation will need to perform via the remote control, which works via infrared (IR). The remote has to be pointed directly to the infrared port on the front of the FreeAgent Theater+ HD media player for it to receive the signal, a small inconvenient for people who wants to hide the box from open view.

With a dimension of 1.18 x 6.89 x 6.89 inch (H x W x L), the FreeAgent Theater+ HD is surprisingly compact and minimalistic, especially when a FreeAgent Go external hard disk drive is used and slotted into the dock. The housing is of sleek black shiny appearance, with just a on/off/standby indicator LED light on the top surface. There are two pieces of removable cover for the drive bay. Unfortunately, when a drive is slotted into the dock, the lower piece of dock cover cannot be fitted back into position, causing the docked drive to be exposed. Of course, it’s possible to connect hard disk to the FreeAgent Theater+ HD via USB cable to USB port, but that defeats the purpose of the dock, especially when one has the FreeAgent Go hard disk. 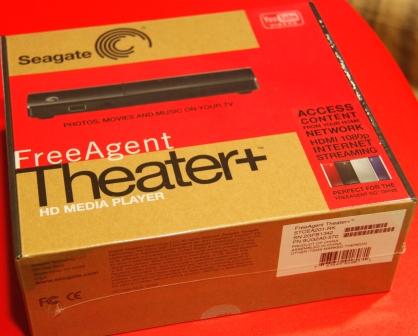 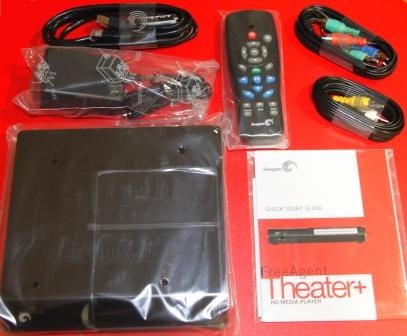 The model that I have, STCEA201-RK, does not come pre-packaged with a FreeAgent Go drive. There is another model, ST905004CEA2E1-RK which includes a 500 GB USB 2.0 FreeAgent Go external hard disk. However, consumer is free to buy any external hard-disk based storage media or flash-memory based storage space to use with FreeAGent Theater+ HD, although the dock may not be usable. A storage media is required to transfer data for playback on the media player. One letdown is that no HDMI cable is included. 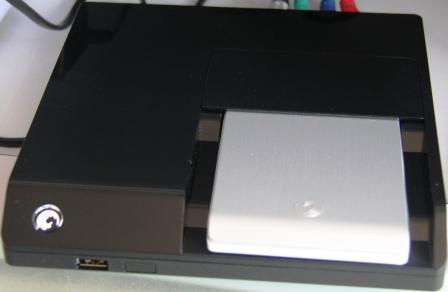 The media player supports displaying of subtitles (have to be same file name with the media though), playing according to playlist and playing the multi-channel audio tracks. With the nearly complete list of formats support, I don’t have any problem playback all multimedia (especially video) which I downloaded from Internet, through BT torrents, eDonkey (ed2K) network or file sharing sites. The audio file from iTunes store in AAC, which is DRM-free, is playable too. However, the older FairPlayer-encoded DRM audio files have to be upgraded first.

Setting up FreeAgent Theater+ HD is easy. Connect the box to the TV via component video or HDMI cable (for HD-resolution video of 720p, 1080i or 1080p) or composite video cable for SD-resolution video), connect the power supply, and then plug-in a USB removable mass storage space with content on it, and the set is ready to playback the media content on the TV. 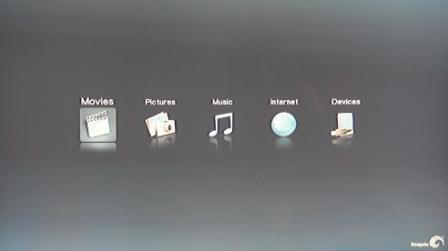 Once startup, user will be presented with a graphical user interface screen with options for Movies, Pictures, Music, Internet and Devices. The options are straight forward, where clicking on Movies, Pictures and Music will playback video files, images and photos or MP3 and audio files stored on the connected USB drive respectively. One neat feature, FreeAgent Theatre+ HD media player able to scan and detect media files which stored inside sub-directories or sub-folders recursively, and presenting a list of movies available to user in thumbnails view, making selection easy. 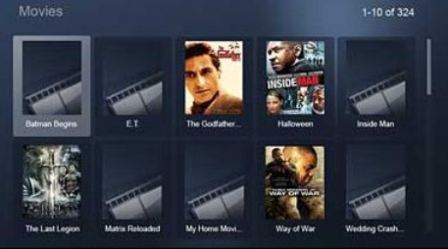 Internet option allows user to browse YouTube, Picase, Flickr, video feeds (RSS), text feeds (RSS), finance widget and weather widget. Unfortunately, it’s not full-fledged web browser though, and user cannot visit websites other than the few built-in Internet services. The built-in apps also does not offer much personalized or customizable options, which making using the Internet modules boring and less attracting. So far, there don’t seem to be an option to add widget or app into Internet module, other than provided by Seagate through firmware update.

Through Devices option, user can manually navigate the folders inside the connected USB drives. Useful if there is any media files not been detected and shown by the FreeAgent Theater+ HD. It’s also the place where user connects to a media streamer or streaming service (provided by device such as Seagate FreeAgent DockStar), or browse the networked locations, based on Windows File Sharing (WFS) protocol.

On the remote control there are also DVD-like playback buttons such as fast forward, rewind backward (which move video at an increment of 1.5x, 2x, 4x, 8x, 16x and 32x), step forward or backward (roughly a 5 minutes jump) and slow motion option. Calling Menu button reveals a bar on top of the screen which makes switching to other functions easier (without having to go back to Home screen), allow changing of subtitle or audio (in movie mode), and allow access to the device’s configuration via Settings.

Seagate FreeAgent Theater+ HD media player offers 10/100 mbps Ethernet port out of the box for wired connection to LAN and Internet. In addition, an optional FreeAgent Theater+ Wi-Fi Adapter USB 802.11n dongle is available for $59.99, and can provide wireless access to the LAN and Internet. Setting up a network connection is automatic on DHCP environment. For secure wireless connection protected by WEP, WPA or WPA2, user need to enter the security key through device’s Settings menu. 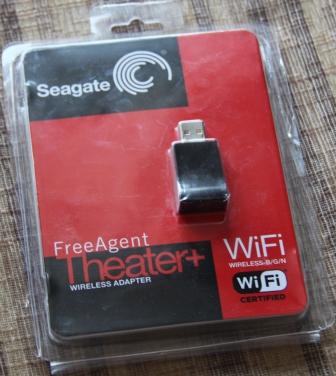 To access and stream music and video files over network, the folders must be shared through Windows File Sharing protocol (WFS or Samba), or user can use a media streamer, which detectable over uPnP, and network attached storage (NAS) devices. FreeAgent Theater+ HD supports logging into the password-protected shared folders, and will automatically prompt for credentials when required. No special software is required on the freeAgent Theater+ HD or the computer. For a fast network (connected via wired LAN cable), a HD video files can be streamed directly over the networked drive. The ability to grab files over network allows user to playback media stored on a computer directly without having to copy the files over to the external USB drives connected to media player. However, on a wireless network, the speed is slow for a HD video files, in particular 1080p video, even on a wireless-N network. 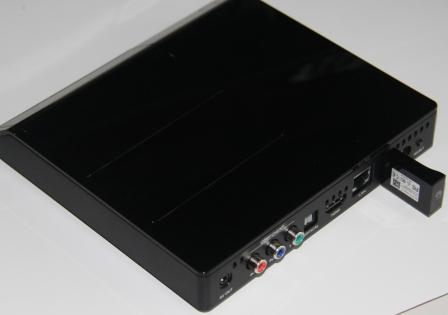 The quality of the video and audio is highly dependent on the quality of the media been played, and may also affected by the hardware – type of TV and speaker or home theater been used. When playing back high quality HD media, FreeAgent Theater+ HD is able to recreate superb rendering of HD video on HDTV. If you’re still using a CRT, there won’t be much different though.

I particularly like the responsiveness of the FreeAgent Theater+ media player, when navigating its menu or when controlling the playback of movies, videos, musics or photos. Slight lag is there, but it can be negligible. There is also no noisy sound of spinning fan, though the device gets pretty hot when powering on for extended period of time. 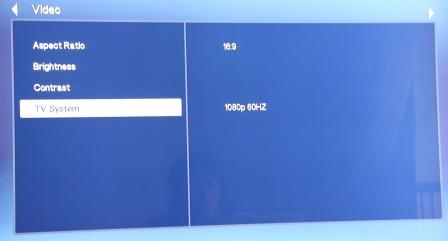 One thing to note is that on initial startup, the FreeAgent Theater+ HD is outputting video at lowest resolution of NTSC 480i. User can press the Menu button on the remote control to go to the Settings to change the video output resolution. 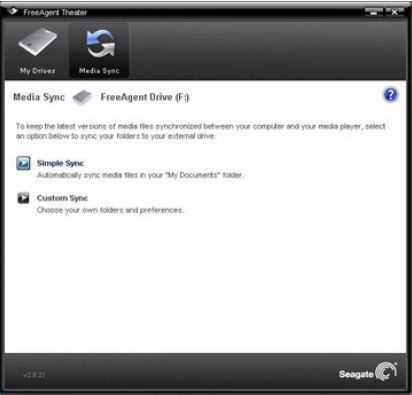 Media Sync is the FreeAgent Theater application that allows users to automatically synchronize media files between computer and a FreeAgent Go portable drive or any NTFS, FAT32, HFS/HFS+-formatted USB external storage device. The application is available for both Windows and Mac platform, but it’s pretty useless, if not a junk. It provides just basic synchronization function to transfer files from computer to the external hard disk drive (hardly a sync unless it’s possible to download media into USB mass storage device when connected to FreeAgent Theater+). The transferring process can easily be done by simple copying. Luckily, the media player can be used and can playback all media files which is copied over but not synced by Media Sync.

Seagate has regularly released firmware update from FreeAgent Theater+, with the current version on offer is 1.45. In future, new firmware may add Netflix support. Firmware upgrade can be done online or offline via USB storage medium. I tried to perform direct firmware upgrade online, which unfortunately fails for a few times (probably due to unstable wireless connection, where AP is at another room). Eventually, the new firmware has to be downloaded, and copied to USB external hard disk drive to perform the manual upgrade. The upgrade process takes more a few minutes to complete, which may cause the unit fails to boot if terminated half way, via power loss or other cause. For user facing problem after upgrading the firmware, here’s the fix to upgrade FreeAgent Theater+ from cold start.

Most family’s living room has a DVD player today. Some will probably happen to media player, especially in growing-trend of broadband-era, where contents are delivered digitally via Internet download. Having a media player allows the digital media to play directly to TV without having to burn to DVD or Blu-Ray disc first. As a media player, Seagate FreeAgent Theater+ HD is definitely one of the best and most easy to use media player in the market today.

Seagate FreeAgent Theater+ HD supports wide array of audio and video file formats, in fact majority of media available and downloadable from Internet can be played without problem. In addition to hot-plugable USB 2.0 mass storage device, the FreeAgent Theater+ can establish network connection to networked location, NAS or media streamer via wired cable or Wi-Fi adapter. It also supports HDMI and S/PDIF optical digital audio, a must for enjoyment of HD video and Dolby Digital or DTS surround sound.

The major disadvantages of FreeAgent Theater+ include no web browser included, and no DVD drive provided (hence no DVD playback). Exclusion of DVD player makes the media player small, and most people should already have DVD player at home anyway, or more intend to grab content digitally. Despite comes with Internet feature, the FreeAgent Theater+ HD also online video rentals. Good news is that, Seagate is committed to add support for Netflix in future firmware upgrade, although most users will need to upgrade to new firmware version again. In fact, the whole Internet capability of FreeAgent Theater+ has a lot of room to improve, although it can only be updated via firmware upgrade. (Note: Seagate has officially announced Netflix streaming support via firmware update)

(official price is $129.99 without hard disk or $219.99 with 500GB hard disk), the Seagate media player is around the same price with competitor’s product, and in some cases, cheaper.