Windows 7 beta (or beta 1) is possibly been released in January or February 2009 which Keith Comb has even mentioned in a comment on his TechNet blog (has since been removed) that “we (Microsoft) are targeting to have the DVD’s in the materials from 1/13/2009 on”. With the imminent arrival of Windows 7 beta 1 milestone build, any build version that is leaked or made know publicly can be of ‘beta quality’ (means can be released as beta build). Windows 7 build 6956, which is been showcased during WinHEC 2008 in Beijing recently, is one such candidate.

According to a participant, edward_han who managed to (change to avoid hurting Chinese feeling as he is doing everyone’s good) get hold a VHD (Virtual Hard Disk) image of Windows 7 Build 6956 out of WinHEC 2008, the build has the following features and enhancements (for complete Windows 7 features, see top 30 Windows 7 features or Windows 7 Reviewer’s Guide):

Last but not least is that the confirmation that Windows 7 build 6956 will be similar (not a lot of differences) with the beta version that going to be released, or in fact can be the beta version itself. This version of build also include a “Send feedback” link, which probably reflect that the build, or slight variation of it is intended for outside of Microsoft consumption.

Here’s the torrent file to download the much anticipated Windows 7 build 6956 with all features already unlocked, unlike Windows 7 build 6801 which requires BlueBadge hack tool to unlock hidden protected features.

Torrent File for BT Network Download: WinHEC.6956.rar (extract for torrent file) or WinHEC.torrent or HEC.rar.torrent (all point to same trackers)

Update: Windows 7 build 6956 setup installation ISO image has been released, and can be download via torrent or HTTP.

The download size of the VHD compressed in RAR archive format is 1.82 GB. 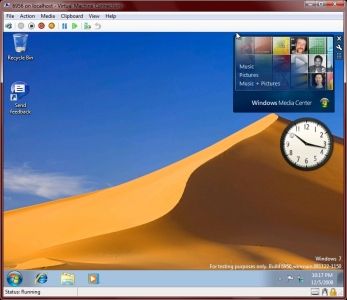